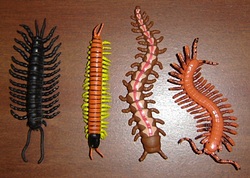 These are mostly found in the garden. These move very quickly. They have 80-160 legs. They are carnivores and eat small insects and spiders. When threatened they form S-shape and hence referred to as "Snake Centipedes". Worldwide, there are estimated to be 8,000 species of centipede. Centipedes require a moist habitat  and lose water rapidly through the skin.Accordingly, they are found in soil and leaf litter, under stones and dead wood, and inside logs.Centipedes are mostly nocturnal (they come out at night). Centipedes live in many different habitat types—forest, savannah, prairie, and desert, to name a few.Some species of centipede can be hazardous to humans because of their bite.


Millipedes
​
Millipedes are harmless dirt dwellers and eat plants and old leaves. They move slowly and are fun to watch. They have lot of legs. When threatened they curl up into a tight coil. Some Millipedes can grow as long as 11-12 inches. They can be kept as pets. They are generally black or brown in color, although there are a few brightly colored species.The millipede's most obvious feature is its large number of legs. Having many short legs makes millipedes rather slow, but the many legs pushing in unison provides powerful strength for burrowing. Approximately 12,000 species of millipede have been described, but the true number of species on earth has been estimated at up to 80,000.Millipedes also appear in folklore and traditional medicine around the world. Many cultures ascribe millipede activity with coming rains.

Tarantula
​
It is a big hairy spider quite scary to look at. It's venom is weaker than a bee's sting and harmless to humans. Many Tarantula's are kept as pets. They have barbed hairs which can also stick and make one itch. They mainly eat insects, but large Tarantulas can hunt frogs, mice and small birds. The largest is the Goliath birdeater, has a 4-inch body and 12-inch leg span. They mostly live in trees.

Black Widow
​
It is a female  with a beautiful shiny black skin. It also has a red mark in its belly. The female is bigger than the male. The female kills and eats the male - making herself a widow. It is the most venomous spider. It's bite is sharp and it injects venom in to prey's body through her fangs.

Brown Recluse Spider
​
This spider is not so big and it tends to be very shy.Its venom is very dangerous and when injected causes the death of tissue cells. The skin is eaten away by the toxins and it takes months to heal.The scar caused by the bite remains forever in the skin. Since the shape of the spiders body resembles a violin it is also called violin spider.

Scorpions
​
These are the most dreaded stingers in the world. It has a barb on its tail which has a pointy thing to sting the predator or prey. The venom in a scorpion's stinger can kill a small animal. It can also sting in self-defense. Scorpions are arachnids, like ticks and spiders. They are found worldwide. 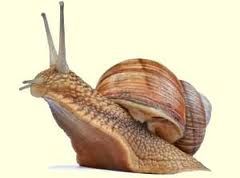 Snails
​
Snails belong to a group called Mollusks.The word "snail" is used in this most general sense, it includes not just land snails but also thousands of species of sea snails and freshwater snails. They use their flat, muscular feet to move. The shells covering their bodies are rich in calcium. They protect them from predators.Their tentacles are used to feel stuff. They leave behind a trace of slime.Snails can be found in a very wide range of environments, including ditches, deserts, and the abyssal depths of the sea.Most snails have thousands of microscopic tooth-like structures located on a ribbon-like tongue called a radula. The radula works like a knife, ripping food into small pieces. Many snails are herbivorous, eating plants or algae from surfaces .In some countries, giant African land snails are produced commercially for food. Land snails, freshwater snails and sea snails are all eaten in a number of countries. 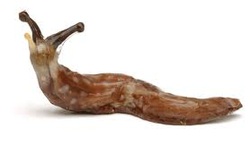 Slugs
​
One major difference that differentiate from snail is the lack of shell.Many slugs munch on garden plants, so they are not welcome.They ooze slime that helps their soft bodies glide over rough ground. Slugs have four feelers. The top feeler can sense light. The shorter ones are used for smell. If the feeler is touched, the slug will pull it back in to its head. Most slugs are gray or brown, but some are colorful. The largest slugs can be 10-12 inches long.Slugs squeeze themselves into confined spaces such as under loose bark on trees or under stone slabs, logs or wooden boards lying on the ground. In such retreats they are in less danger from predators , and often those also are suitable places for laying their eggs.